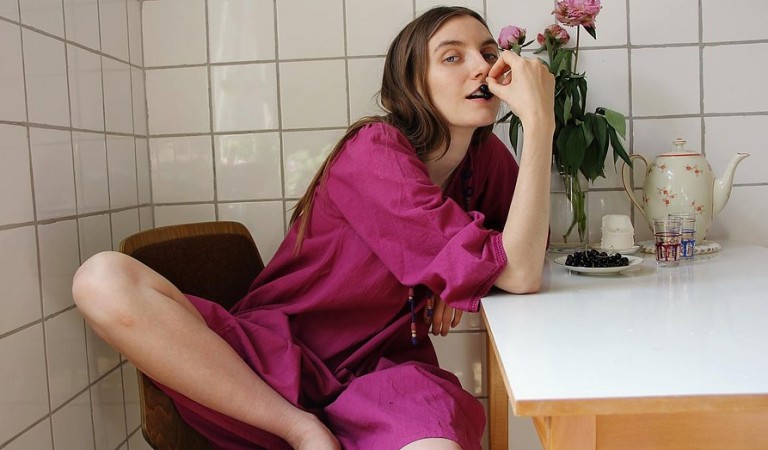 Most of us vintage lovers wear clothes from 1920-1980s but do not have the chance to try on historical ball gowns. I met Berlin-based actress Sophie Bogdan who acted in many historical and retro productions to tell us about the feeling of being a vintage princess for a day.

Since 2012 – her personal year of period movies – Sophie gained lots of experience in that genre. She acted in arty short films as well as reenactments for historical documentaries on TV and her own revue play.

But actually her passion for vintage-related projects started earlier in 2010 when she acted in the 1920s-inspired silent movie Devotion by The Macuto Collective that makes feminism, emancipation and androgyny a subject of discussion in a family melodram. “It’s about getting rid of gender terms: a woman dressed as a butler enters the home of two orphaned sisters who both fall in love with the stranger. The first sister mistakes the butler for a man while the other discovers the secret of being attracted by women. All this confusion just made by costumes!”, Sophie remarks.

The motion picture Jane Eyreinspired Sophie to realise a free project with the photographer Hannes Caspar and develop the short film One in only two days. They got the costumes from a theatre props room and started filming in the poetic place of Grunewald, known from tales of German romantic authors.

In the summer of 2013 Sophie then developed a 1920’s revue play together with two fellow actors: Her mit der Marie – Berliner Hofgeschichten. The play tells scenic stories that could actually have happened in the backyards of 1920’s Berlin and therefore portrays the socio-cultural environment. Sophie states: “The 1920’s revue context was established from the beginning so we started to invent stories around that place and time. Which people could have lived and what kind of stories could have happened here? We were inspired by 1920’s writers and developed the play by improvisation until we finally wrote some notes for the scenes.”

They later were joined by two musicians from the  band The Beez and decided to set their play into a natural environment without an actual stage or much scenery: the original backyards of Berlin. While the men’s costumes were found in the prop room of Hoftheater Kreuzberg and were original clothes from the era, Sophie found her dress at

Humana 2Hand. “I love that 1920’s loose fit. The dresses are short and show your legs. Seems like they were simply made for dancing!”. Sophie’s eyes sparkle as she tells about the feeling of wearing a true vintage dress, “The costume makes it possible to enter another time that is super different from your everyday life. I love letting go fantasies.” The 1920’s revue genre is characterised by strong texts and special storytelling by scenes and songs. Sophie’s interested in the different ways of physical as well as verbal communication: “You use features as singing or dancing to express feelings. And of course your costume helps you to keep your naturalness.”

Besides, Sophie took part in more commercial projects such as reenactments for documentaries about historical figures. She played strong and outstanding female characters who lived between 1970-192, from a vanacular author over a fictional novel character to a theatre reformer. For these roles she didn’t even have to go for a casting but was engaged due to her vintage-looking face. Still there’s lots of work to do: “These roles are very interesting because I have to do lots of historical research to play existing figures. But it’s all worth it ‘cause I portray these strong free women who didn’t fit into any stereotypes.”

For us vintage fans the focus in historical movies and plays is definitely on the costume so I didn’t hesitate to ask Sophie about that.

How does it feel to wear a piece that survived two World Wars and do original costumes help to get into historical roles?

Definitely! It helps a lot to wear an original costume to get the expression of a character of a certain era. For example such a 1870s-dress changes your whole body posture and you can’t get out of this new posture while you wear it. These dresses usually include corsets which put pressure on your torso and lungs so that it’s hard to breath. And also the wrists and the neck are tightly buttoned with the result of your body posture being very straight which is super exhausting. Besides, it takes more effort to move: the dresses are very long and heavy and the shoes don’t have a suitable footprint for wearing them outside. I guess that sounds very negative but at the same time the costumes makes you focus on your body language and gives you the very physical feeling of being strong.

How does the costume represent the socio-cultural feeling of that decade?

You get to know much about the social distribution of roles as well as the perception of women and the model of femininity of the certain era. The dresses from the fin-de-siécle show women as beautiful and model-like creatures: fragile and innocent, elegant but immobile. Due to the physical limitation you can’t be wild or spontaneous. You can’t run and jump that easily. Also the hairstyles affect the posture of the head and the whole body. But for me it’s a cliché that it only expresses female inferiority and deference. For me it also emphasises pride and strength. Power, presence and body tension.

What does the audience find interesting about a past zeitgeist so that it is still shown on TV and in theatres?

I think many people like historical reenactments in documentaries because they help them to create a feeling for the time presented. It’s a pleasant way of history education. The audience is fascinated by an era which is only 100-150 years ago but is so completely different from of life nowadays and of course fashion illustrates that fact too. The fin-de-siécle gives the audience the feeling of home, safety and nostalgia. Especially in Germany, the thought of the Imperial Era, before the two World Wars, feels like ideal world: splendid and honourable. They recall a state of glorious unity.

Which decade is most interesting for you as an actress?

I love the 1960s and 1970s in which people tried out new things! Nowadays it’s so hard to cross borders and rebel against something. Society goes back to the well-arranged borgeois kind way of life. But I fall for passion and devotion. I’m interested in eras, in which people live through a change. Joan of Arc is inspiring for me too.

Do you also wear vintage clothes in private?

Since I was a child I only shop clothes on flea markets and in 2nd Hand stores. I’ve always been the smallest member of my family and wore the old clothes of the bigger ones. I also got much vintage wear from my mum and my grandma who was a tailor. In the last years I got more and more clothes from flea markets. There is one rule: the cheapest stuff is the most extraordinary and smashy! Now I even have a small private collection of costumes.

What’s your favourite decade in vintage fashion and how would you describe your style?

In private I prefer 1920s and 1960s fashion. 1920s dance dresses as well as 1960s beach fashion and hippie stuff but also colourful children’s wear. I love dainty looks, but not too fussy, not too much flourish! When I was younger I loved the 1960’s school girl look and wore super short skirts with high socks but nowadays I better like longer ones. In general, I barely wear trousers. I’m star sign Aquarius: I don’t like trends – unisex jeans and sneakers are boring! I like to show some femininity. But I don’t have a definite style – I guess that’s an actor’s thing – I love changing my looks everyday: girl, lady, prostitute and sometimes not a look at all. I think it’s very important to be free from conventions.

Is there a special piece of vintage clothing you desperately want to have?

Definitely! I always dreamt of gents’ shoes but my feet are too small to find any. So from my first big salary I will get a pair of custom-made vintage-inspired Budapester brogues.

How do you use vintage fashion to express yourself and what does it tell about you?

I like to provoke with fashion, to show different faces. I enjoy looking completely different every now and then and escape normal life. I use fashion as illustration of my mood and my situation in life. Both as an actress as in private, I don’t eagerly want to look beautiful – that’s boring! I want to express myself in different ways.

What is special for you about vintage fashion?

What I like about vintage fashion is that you wear a piece of history on your body, a contemporary witness. Vintage clothes have a soul and tell many stories. I love the singularity of handmade pieces: they fit much better because they are tailored and not produced for the masses. It’s not something you wear, it’s something you live. Vintage fashion is simply special.

This website uses cookies to improve your experience while you navigate through the website. Out of these, the cookies that are categorized as necessary are stored on your browser as they are essential for the working of basic functionalities of the website. We also use third-party cookies that help us analyze and understand how you use this website. These cookies will be stored in your browser only with your consent. You also have the option to opt-out of these cookies. But opting out of some of these cookies may affect your browsing experience.
Necessary Always Enabled
Necessary cookies are absolutely essential for the website to function properly. This category only includes cookies that ensures basic functionalities and security features of the website. These cookies do not store any personal information.
Non-necessary
Any cookies that may not be particularly necessary for the website to function and is used specifically to collect user personal data via analytics, ads, other embedded contents are termed as non-necessary cookies. It is mandatory to procure user consent prior to running these cookies on your website.
SAVE & ACCEPT
Loading Comments...