Miss Kitty gives us a brief history of
vintage swimwear

The 1920s was the decade where swimwear first started to resemble the swimming costume we know today. The Twenties were a decade of female emancipation: long hair was bobbed short, hemlines got higher and higher and it got increasingly more acceptable for women to have careers. The new form-fitting swimwear reflected the spirit of the age. The style tended to be similar for both men and women, with a form fitted knitted tunic and shorts.

Swim suits tended to be made from wool jersey and suited the fashionable androgynous figure of the time.

Did you know: It was illegal in the US for men to swim with their chests exposed until the mid 1920s, and in some places this law lasted until the early 1940s! 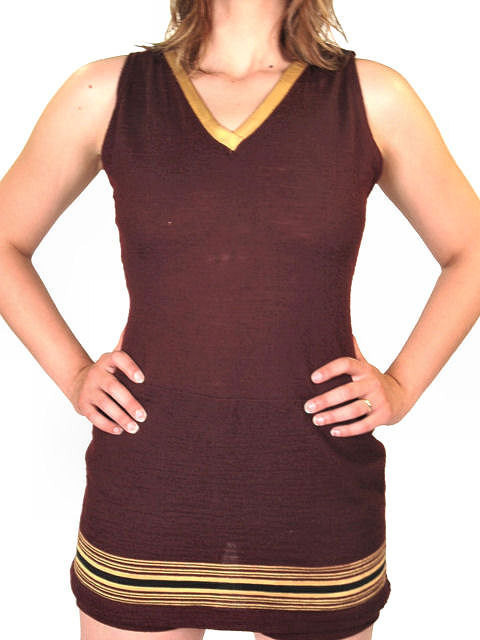 Swimwear became a lot more feminine in the 1930s. The swimsuit evolved to be skirted, flared and much more flattering. Lastex (a stretchy elasticated cotton material) became fashionable and allowed for much more form-fitted styles which were popularized by Hollywood stars like Esther Williams. Two piece swimsuits and suits with cut-out panels were popular during the 1930s, although the bottoms were always high-waisted and wouldn’t show the navel.

Below: Original 1930s “bathing beauty” style swim suit, in a navy blue textured wool. It has a shaped bodice, a waistband, a short skirt and wool panty with unique braided straps fit into channels. 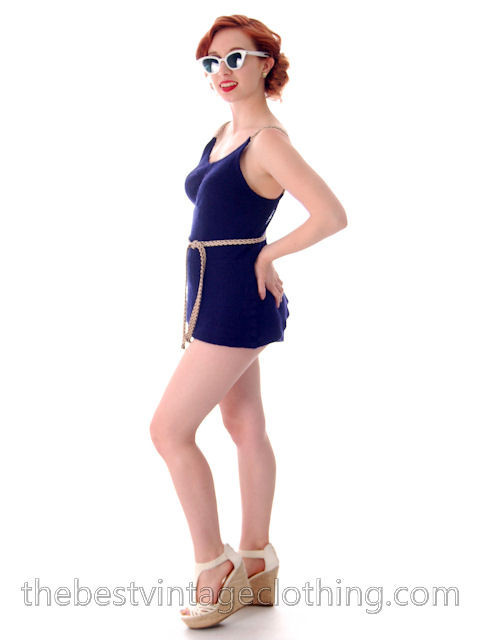 Nylon was invented in the late 1930s but because of the Second World War most nylon was used in the manufacturing of military supplies rather than in swimwear.

Corsetry was introduced into the swimming costume, by adding elasticated panels and boned bodices and materials used were mostlycotton or lastex.  People also made their own swimming costumes from whatever they had at home due to rationing and fabric shortages.

The first true bikini was unveiled by designer Louis Reard in Paris in 1946. Two-piece swimsuits had been worn in the past, but this was the first string bikini. Reard claimed that a true bikini would be small enough to pass through a wedding ring and it was seen as very scandalous at the time. 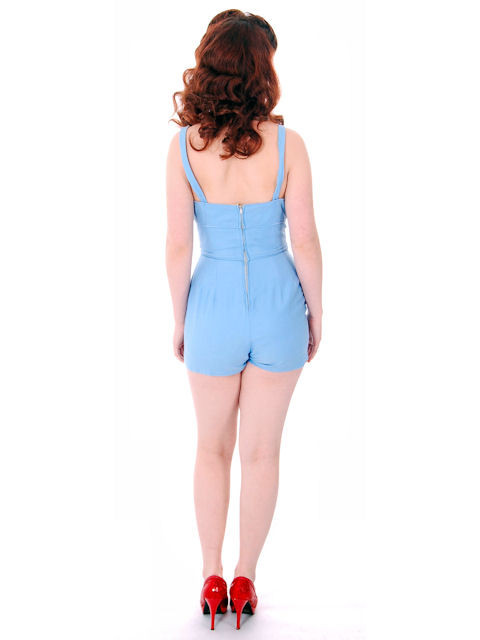 All in one swimsuits were the most popular style during the 1950s, especially since they now included built in bras and more support than ever. Strapless styles were fashionable along with bright tropical prints which just hadn’t been available during the wartime years.

Below: Lovely vintage 50s cotton bathing suit from Catalina, in a great abstract print of brown and gold with black and white accents. It has a “Bubble butt”, so called because the bottom and legs are elasticized to create that look. 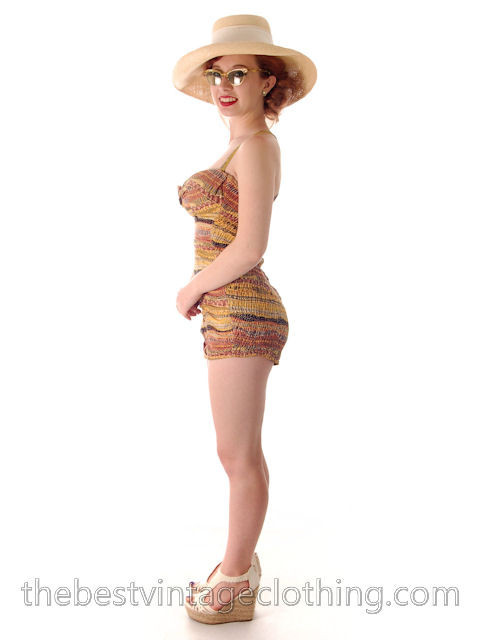 Nylon and Lycra really molded the shape of 1960s swimwear. The introduction of those fabrics allowed for much stretchier form-fitting styles, and swimsuits became more risque to compete with the bikini.

In 1964 Rudi Gernreich designed the topless ‘monikini’ which caused great controversy and was even denounced by the Vatican.

Below: Vintage 1960s stretch bikini with round formed hard cups in the bra; it is adjustable with buttons. Bottom has boy leg style, pull on by Catalina (who founded the Miss USA and Miss Universe beauty pageants as a way of promoting their products). 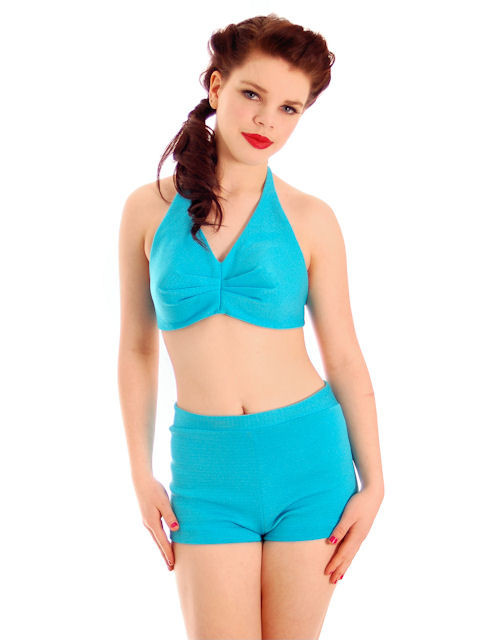 By the 1970s the shape of swimsuits was pretty much the same as now, but with new features like front zippers and mesh panels add extra sex appeal.

Below: A 1970s “Wet Look” swimsuit which looks like liquid chocolate! Its a one piece maillot with a white metal zip front, and boy leg styling. 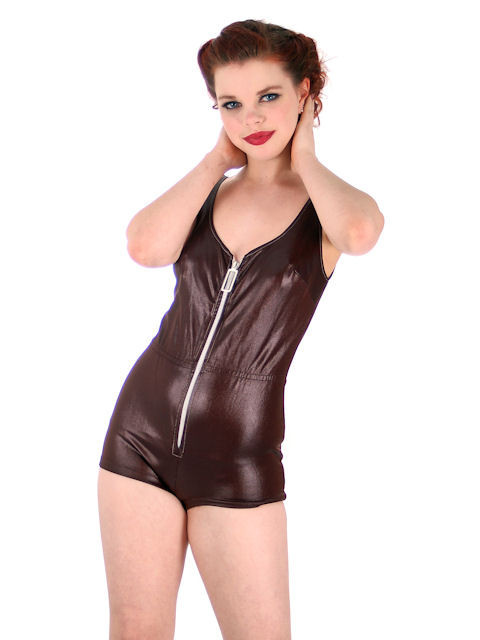 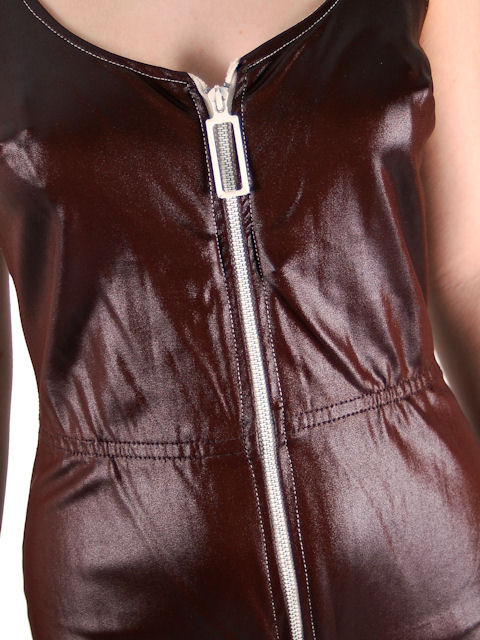 All the swimwear above are or have been for sale at The Best Vintage Clothing.

To read more of Miss Kittys visit her blog.

This website uses cookies to improve your experience while you navigate through the website. Out of these, the cookies that are categorized as necessary are stored on your browser as they are essential for the working of basic functionalities of the website. We also use third-party cookies that help us analyze and understand how you use this website. These cookies will be stored in your browser only with your consent. You also have the option to opt-out of these cookies. But opting out of some of these cookies may affect your browsing experience.
Necessary Always Enabled
Necessary cookies are absolutely essential for the website to function properly. This category only includes cookies that ensures basic functionalities and security features of the website. These cookies do not store any personal information.
Non-necessary
Any cookies that may not be particularly necessary for the website to function and is used specifically to collect user personal data via analytics, ads, other embedded contents are termed as non-necessary cookies. It is mandatory to procure user consent prior to running these cookies on your website.
SAVE & ACCEPT
Loading Comments...